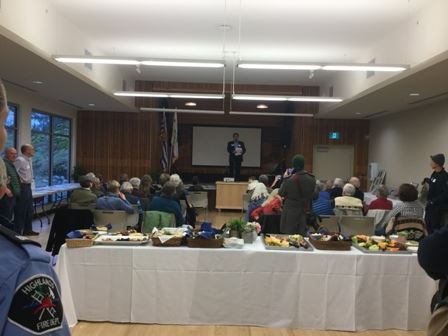 On behalf of council, it is an honour and a great joy to address you at our 25th Anniversary Celebration Party. We acknowledge and thank the Lkwungen and SENĆOŦEN First Nations communities, for allowing us to live, work and play on their lands.

Thanks to all of you for joining us here today and a big shout out to all the volunteers, community organizations and staff in making this symbolic day possible. Highlanders take great pride in their rural community. Highlands is a special place filled with inspiring people whose level of volunteerism and self reliance is second to none in the region.

I think Kathy Gose said it best on the day of our incorporation, Dec.7, 1993. “Small is beautiful!” “Green is powerful!”.

Highlands has certainly accomplished much in the past quarter century. We are leaders in the province, not only environmentally, but fiscally. The Canadian Federation of Independent Business has recognized Highlands as the municipality with the lowest operational costs in the province out of 162 municipalities. That’s over a ten year period! But the work is not finished and the future is bright as we continually strive to implement the exciting ideas and vision coming from our community.

Once again, thanks to all our staff, councillors, firefighters, community organizations and volunteers who give so much back to our community. 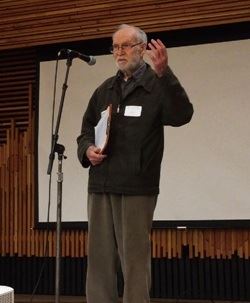 My love affair with the Highlands began, by proxy, 70 years ago when UBC student Nancy Wallick came with a friend to weekend in her friend's parent's log house at Second Lake.

Nancy visited Frank and Sybil Gregory in their log house overlooking Fizzle Lake. Frank by then was an old man, the last of the Highlands pioneers. He sat behind the wood stove to keep warm.

Nancy was so enchanted by the Highlands that when we decided to get married in 1952, and I knew I had a job in Victoria , she said - I know where we want to live - I had no choice - but I have never regretted her decision.

We came to live in the Highlands in 1953. When our children were young in the 1960's, we could wander wherever we wanted because the Highlands was largely uninhabited, the settlers had left and most of the land had absentee owners.

I was also inspired by the City Forests of Europe -the forests of Oslo, Hannover, Frankfurt, for example, were the lungs of their cities - I thought the Highlands could be that for Victoria.

By the 1960's, pressure to develop the Highlands had increased sufficiently that Nancy thought we should have an organized voice.- I started the Highland Rate Payers Association, now the Highlands District Community Association. Some of our early planning documents are among the exhibits

In the late 1980's, the Langford Electoral Area, Highlands was joined at the hip with Langford, had a referendum on incorporation. All the Langford polls voted against incorporation, only Highlands voted in favour - what a near death experience that was.

I co-chaired the Highlands·Incorporation Study Committee. We were ready for a vote in three years. The Langford Committee was not yet ready. Municipal Affairs made us wait a year until Langford held its vote because the government wanted us to join Langford.

When we voted, 70% favoured incorporating and 80% not to join Langford. The CRD and some of the region's mayors did not want a "rinky-dink" municipality to incorporate. Fortunately the Minister gave us the green light.

I volunteered to run as Mayor and I and the first council were elected by acclamation. We held our inaugural meeting in December 1993 - 25 years ago. The newspaper cuttings tell some of the District of Highlands story since then!

The District of Highlands Incorporation Video

The District of Highlands Incorporation video was dusted off and reproduced for the celebration.  The video link can be found here.  Below are a couple of still photos taken from the video. 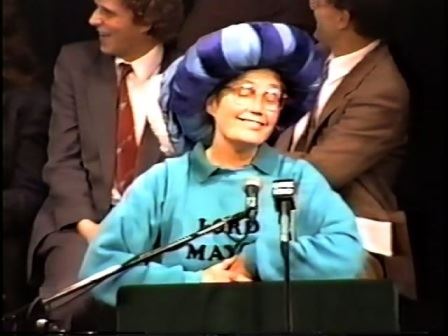 MLA Darlene Marzari, Minister of Municipal Affairs with the first acclaimed Highlands Council in the background 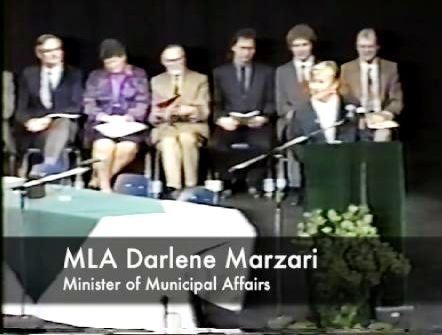 Three Things I love Most about the Highlands......

Attendees were asked to list three things they loved most about living in Highlands.  Councillor Ann Baird took all those comments and created three wordclouds.  Below is a photo of the poster created and the resulting wordclouds.  Do you have a favourite?